Caring For Ourselves and Our Community - Processing and Responding to Trauma

The UC Davis community is encouraged by its progress of becoming an HSI serving institution; however, to participate and contribute at the highest levels of U.S. society, our Rising Scholar undergraduates also deserve access to the highest level of education.

The report by the National Science Foundation (NSF), “Doctorate Recipients from U.S. Universities: 2015,” asserts the value of a doctoral level education by noting the breadth of careers recipients enter from small to large organizations or starting their own businesses. Furthermore, a graduate education “develops human resources that are critical to a nation’s progress—scientists, engineers, researchers, and scholars who create and share new knowledge and new ways of thinking that lead, directly and indirectly, to innovative products, services, and works of art. In doing so, they contribute to a nation’s economic growth, cultural development, and rising standard of living (National Science Foundation, 2017a).”

The same NSF report also identifies earned doctorates for underrepresented students by fields. These data demonstrate that Chicanx/Latinx students are heavily represented in the fields of humanities and arts and are nearly equal to the life sciences (See Figure 24). These data beg the question of why doctoral representation is not evenly distributed for Chicanx/Latinx across all disciplines and at higher percentages, potentially equal to their presence in California (39%) or the U.S (18%) in 2018.1

A recent report from the U.S. Census Bureau (2019) indicates that the number of people in the U.S. population that have earned master’s (21,280,000), professional (3,202,000) and doctoral degrees (4,487,000) have doubled in the past two decades.2 However, the number of Chicanx/Latinx who have earned graduate degrees in the U.S. population represent numbers and percentages far below their corresponding overall numbers and percentages:2

To understand the imperative of welcoming and supporting Chicanx/Latinx students to pursue graduate degrees, it is valuable to understand the context of their enrollment in graduate programs at UC Davis.

From the most recent data,3 in fall 2018, the enrollment of graduate students across all graduate academic and professional degrees numbered 7,291 of which,

The current increases in the numbers and percentages of Chicanx/Latinx undergraduate students at UC Davis is a result of an intentional strategy. However, a similar increase for Chicanx/Latinx graduate students has not been realized due to a very different model for graduate admissions. While undergraduate admissions are led by a team of high-level administrators and admissions professionals, an analogous infrastructure does not exist for the majority of graduate and professional programs at UC Davis, much less in higher education.

Since the passage of Proposition 209 in 1995 the University of California, with its commitment to public education and access, has slowly developed undergraduate admissions practices that are a combination of qualitative and quantitative metrics that considers the background and preparation of applicants holistically. The development of holistic admission practices, coupled with strategies and well-trained, year-around professional staff have resulted in an increasingly diverse, prepared and competitive undergraduate student body.

Broadly, each year, graduate admissions committee members and chairs are assigned, often by the department or group chairperson to review applications and decide who to admit and fund with disciplinary logics foremost (Posselt, J., 2015). Graduate admissions committees and leadership regularly change from year-to-year, consequently developing new, or simply ongoing graduate admissions policies and procedures that have little time to coalesce against a backdrop that prioritizes faculty research above teaching and service. Thus, the vision and established practices, training and consistency resulting in UC Davis’s HSI status at the undergraduate level is founded in a structural model inherently different from how graduate admissions take place at UC Davis and at similar research institutions. 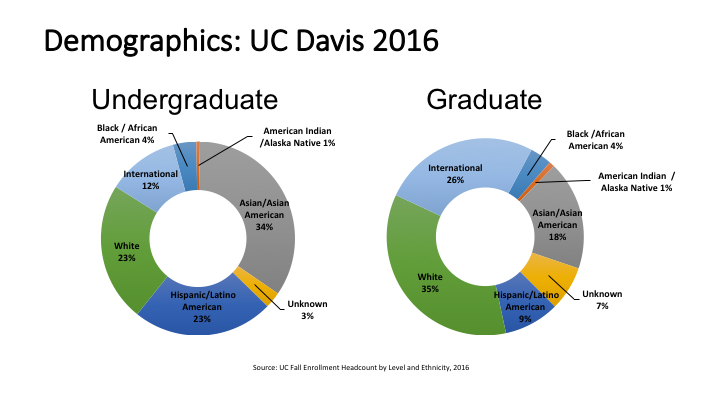